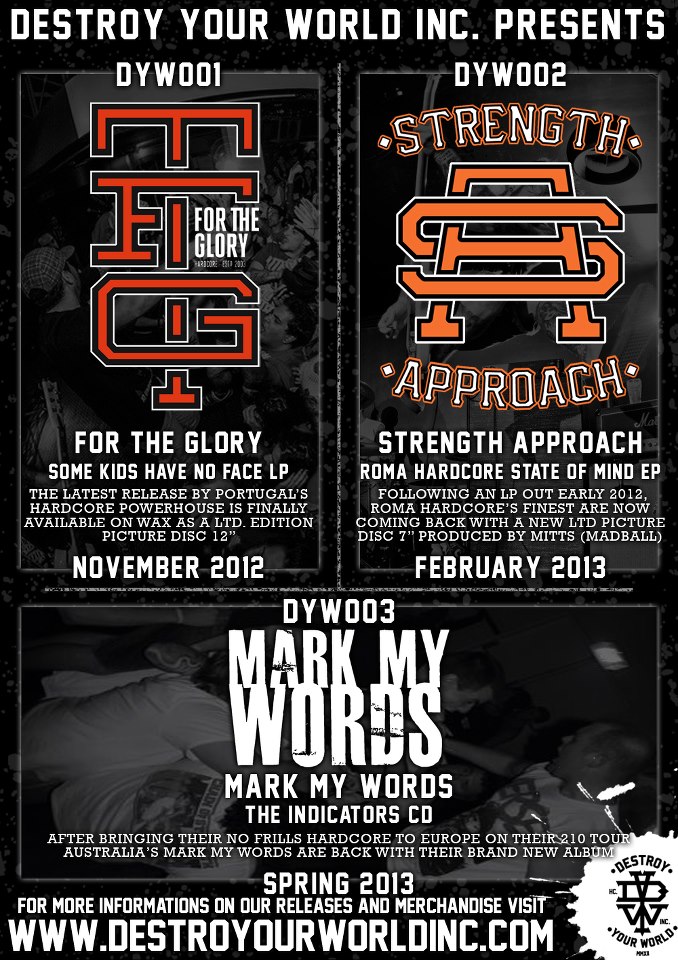 Shortly after announcing the birth of Destroy Your World Inc. and the upcoming release of the free sampler DYW000 “Back On The Map Vol.1”, here at the DYW-HQ we couldn’t be more excited to be announcing our first three releases planned for late 2012 and early 2013.

DYW001 – FOR THE GLORY “SOME KIDS HAVE ON FACE” PICTURE DISC 12″
If you’re familiar with European hardcore, then you most probably don’t need no introduction to For The Glory seen that the Portuguese hardcore powerhouse has been shredding stages all over the mainland since 2003 with their groovy hardcore. Here is their latest studio effort, “Some Kids Have No Face” finally available on wax as a limited edition picture disc 12″. Out November 2012.

DYW002 – STRENGTH APPROACH “ROMA HARDCORE STATE OF MIND” PICTURE DISC 7″
After releasing a brand new LP earlier this year (“With Or Without You” GSR/DRA) and touring non-stop as part of the European Rebellion Tour and countless other shows all over Europe, Roman hardcore legends will soon get back in the studio to get some new tunes out in the streets, with Mitts (Madball/Ragmen) covering the production duties! Roma Hardcore State of Mind! Out February 2013.

DYW003 – MARK MY WORDS “THE INDICATORS” CD
Australia’s Mark My Words are no strangers to the European hardcore scene. After their European tour in 2010 supporting Strength Approach and their split with Germany’s Suffer Survive, the band is now about to unleash their brand new album to the European masses! With “The Indicators” coming out in their home country in the next few weeks, expect MMW to hit European stages supporting their European release next spring! Out Spring 2013.

Bands: For The Glory, Strength Approach, Mark My Words