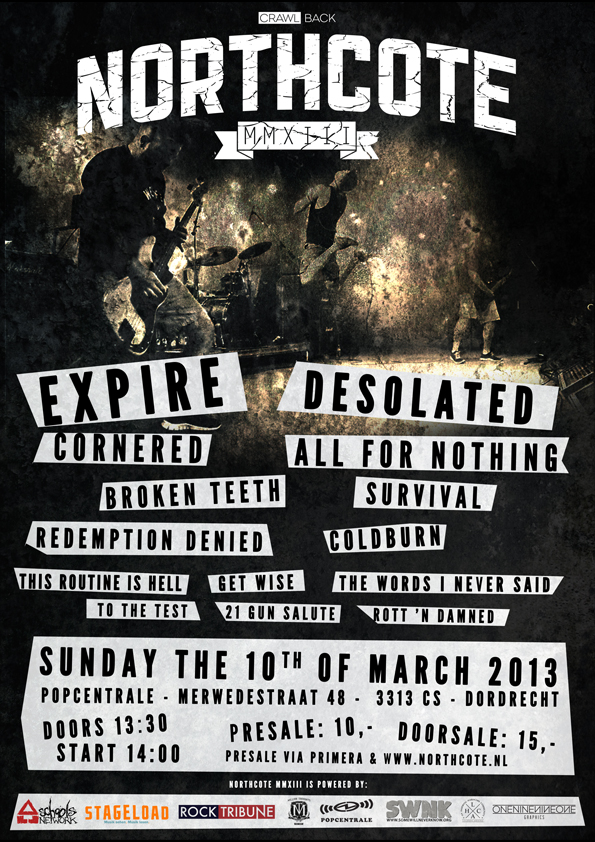 After confirming top notch American band Expire, UK’s Desolated, and Coldburn from Germany, Northcote is excited to announce the complete line-up today. After the success of last year, the organization has yet again confirmed a killer line-up that will make the hearts of Hardcore fans beat faster.

The second edition of Northcote Festival will take place on Sunday March 10th, 2013 at De Popcentrale in Dordrecht (NL). The line-up includes fourteen national and international bands. The United Kingdom will be represented by Broken Teeth (Metallic Hardcore from Manchester), Survival (Youth Crew from Manchester preaching the Straight Edge), and the earlier confirmed Desolated (Death Metal with Hardcore influences). From Belgium comes Get Wise (Old School Hardcore, back to the roots) and Redemption Denied (straight-forward Hardcore: stagedives!) who are backed up by Italy’s The Words I Never Said (heavy melodic Hardcore). At national level, the festival presents Cornered (HARDcore!), All For Nothing (female fronted Hardcore from Rotterdam), This Routine Is Hell (intelligent Hardcore from Utrecht), 21 Gun Salute (furious kids writing furious songs) and Rott ‘n Damned (aggressive riffs with powerful lyrics).

Northcote Festival 2013 welcomes all fans of heavy music; together we’ll be able to realize yet another successful edition. Tickets are available for only 10 euros at Primera and via www.northcote.nl.

Bands: Expire, Desolated, Cornered, All For Nothing, Broken Teeth, Survival, Coldburn, Redemption Denied, This Routine Is Hell, Get Wise, The Words I Never Said, To The Test, 21 Gun Salute, Rott 'n Damned