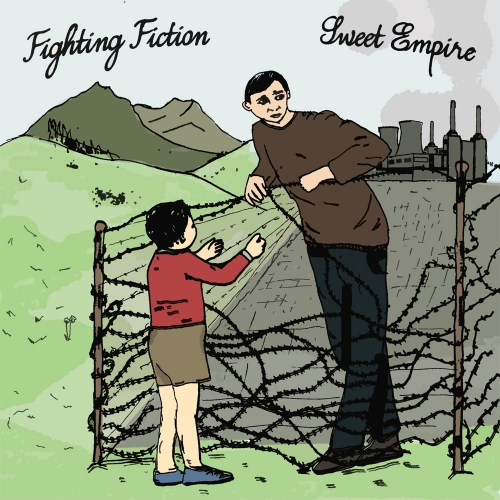 On September 2nd United Kingdom’s Fighting Fiction and Holland’s Sweet Empire will be releasing a split 7” together. The vinyl will contain two new songs of each band.

As Fighting Fiction and Sweet Empire are both melodic punk rock bands, writing songs conveying their opinion about this world the two bands fit together perfectly on this release. After the bands had played a few shows together, and probably shared a beer too many, the idea to release a split record felt very natural. This promise has been kept and will see the light of day on September 2nd.

Fighting Fiction’s side of the release contains two songs. ‘The Long And Short Of It’ is a song about feeling trodden on; resenting your placement at the bottom of a pyramid shaped food chain. ‘The Trials And Tribulations Of A Talent Show Contestant, “Tonight Matthew I’m going to murder somebody else’s song and pretend that it was the kindest thing to do”.’ This is a song about the depressing rise of the cult of TV personality, and the degradation of art. It features guest vocals from Corbin Parsons of thekidisfireworks, one of UK’s finest bands. This is the longest title the band has given a song ever; thanks go out to Stillbust for goading the band into that, with their inventive and hilarious song titles.

On the other side of the vinyl Sweet Empire deals with the Soviet revolution and how that went totally wrong, on a song called ‘Soviet Deception’. The second song of the Dutch band is called ‘Business Bastards’. This song shows a typical example of how some CEOs manage their companies without any empathy and doing anything to make as much money as possible.

The 7” will be released by three record labels: Shield Recordings (Holland), Lockjaw Records (UK), and Laserlife Records (Austria). The 7” can be ordered directly from the bands or the labels. Also for a stream (also available below), download or order of the record please go to BandCamp.