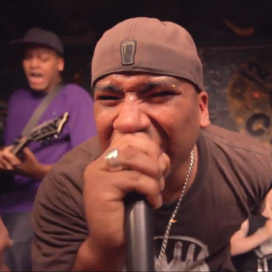 Knuckledust are back with a new video:

“Bluffs, Lies and Alibis” is the title track for the quintesstial Knuckledust album. Or as the label puts it:

Knuckledust are an institution! They have a longevity that few can equal and they are back with a brand new album on GSR Music called “Bluffs, Lies and Alibis”. Knuckledust are a band that are not trying to re-invent the wheel, but what they will do is give you slab upon slab of crushing hardcore punk with hardcore punk ethics and hardcore punk attitude. Knuckledust have never had an easy ride, nothing was every handed to them on a plate, they’ve never been spoon fed. Everything they’ve ever achieved has been because of their drive and motivation to push themselves to their limits and beyond. That is why they have lasted 16 years, that is why they have toured allover the world and that is why they have released crushing album after crushing album. It’s also the reason why “Bluffs, Lies and Alibis” exists. Every ounce of what Knuckledust is becomes apparent on their latest release. The rawness, the emotion, the pulverizing heaviness and the barked, pissed off vocals of Pierre embody everything Knuckledust is and all these traits are ever present and more dynamic than ever. “Bluffs, Lies and Alibis” seamlessly fuses that well known brand of hardcore out of the Big Apple with the street punk sound that was born on the streets of their native London. Powerful grooves intertwine with breakneck hardcore and edgy punk basslines giving every Knuckledust fan just what they want. The band’s own words say it best though “Too punk for hardcore and too hardcore for punk”, but there are enough elements of both to keep any fan of either genre bouncing off the walls and slam dancing in the pit for hours. “Bluffs, Lies and Alibis” is the quintessential Knuckledust album and should be required listening for any hardcore punk.