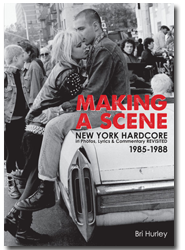 Originally released in 1989 with a scant 79 photos and under 100 pages; this expanded edition brings over 200 photographs as well as reflections from key characters documenting a special time period in one of the most notorious hardcore music scene in the country.

Making a Scene – New York Hardcore in Photos, Lyrics and Commentary Revisited 1985-1988 captures the energy of the New York hardcore music scene in photographs, lyrics, and comments from those involved in their music, their attitudes, and their lifestyle.