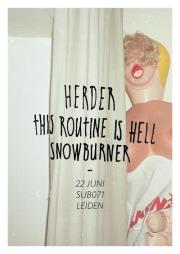 No matter the local scene there are always some people who seem to be involved in a thousand plus bands. The Netherlands isn’t any different. One of these guys definitely is Nico. He was in Daily Fire, Omission, Rush N’ Attack and nowadays fronts the notorious Herder. Since Nico is going away to live in Australia for a year it was time for a goodbyeparty in Leiden’s squat Sub071.

A long time ago I used to frequently visit squats to see bands like Vitamin X, Asshole Parade etc. I must say my visit to Sub071 surely brought back some good as well as ‘bad’ memories. The smell of squats for example. It doesn’t seem to matter in what country you are a squat will most likely smell like garlic, smoke and sweat. The garlic always stands out. Another things is the sound. No matter what band you’re watching they always sound the same: a barely audible singer, lots of bass and some guitar melodies if you really pay attention.

So the show started pretty late but Snowburner played a good set. Though the band is new most bandmembers have been around for a while. Drummer Jan was in Daily Fire and Omission, vocalist/bassplayer Jop used to play in the, at the times, high profiled and political band Point Of Few. Snowburner sounds nothing like that band though. If you’re looking for some new good stoner stuff, Snowburner is a band you might want to check out. The band has the groove and Jop has a pretty good voice for this kind of music. People were into their set but my attention span honestly is as long as a decent melodic punkrock song so after 2.25 minutes I was kind of looking around and talking to people again till the next song kicked in.

This Routine Is Hell

Next up were This Routine Is Hell. They’re going to tour and record in the USA so in a way this was also a goodby show to them. The band played a good mix of songs from The Verve Crusade and Repent. Repeat. People were dancing and singing along and vocalist Noam knows how to fire the audience up a bit more. He’s probably one of the more intense front man in The Netherlands at the moment. Though the band suffered from a very bad sound things improved further into the set and they had Nico do ‘Deny Everything’ with them. I really hope for these guys their US tour is going to be good and look forward to the new Kurt Ballou produced record.

The main reason why I came along to this show was that Johan Reflections has been raving on how great Herder is for quite a long time. Since this was the last occasion to see the band with Nico for a year I finally gave in and prepared my ears for a sonic assault I never experienced before. Well if the band had played one of the bigger Dutch clubs with a great sound system that might have happened. But not in this squat. So did Herder disappoint? No. The band gave it all and got as much back from the audience. As said earlier stoner ain’t my thing but I could enjoy Herder’s set. The metamorphosis of Nico from being this modest guy of stage to the ‘beast’ with a mic never fails to amaze. And the guys in Herder sure know how to play their instruments. The contrast between the ‘sick’ sound of Herder and the good spirits in the room from Nico’s friends surely added an extra vibe to the show. People had an all or nothing kind of mentality and everyone, except for the sound guy, did their best to see Nico off in a positive way. See you next year at the welcome back party?

All pictures by Anne Carolien Kohler.