I Hate Our Freedom – This Year’s Best Disaster 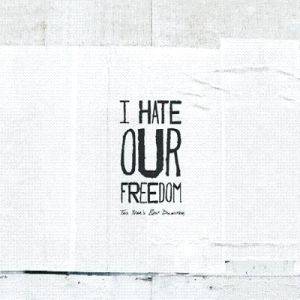 Often one can judge the quality of a band by their bio. The longer and more outrageaous the biography is, the more the band usually sucks. It’s true so often one could say it’s a scientific rule. Now let’s take the bio of I Hate Our Freedom, a band I never heard from before:

This is very simple. members of Garrison, Texas Is the Reason, Thursday and Milhouse. This is the straight-up no frills, 4-white-guys-with-guitars, canbeered and duct-taped rock we were all going deaf to before we got into girls.

So it’s short and to the point. If my scientific rule is right ThisYear’s Best Disaster, apparantly the second record from this Brooklyn based band is good. And it is. If you’re into bands like Sense Field, early Rival Schools etc you’ll dig this band.

Much to my surprise Kurt Ballou produced this record. I only know his work with hardcore bands like Betrayed and his Deathwish stuff like Converge and Rise And Fall and it’s nice to hear an other style music that he is able to work with.

The only thing I’m less thrilled about is the artwork of this record. The typographics are very small and almost unreadable on the cd-version I have. Maybe they’re bigger on the vinyl edition. But that aside I Hate Your Freedom is one of the best surprises of 2012 so far.

Band: I Hate Our Freedom