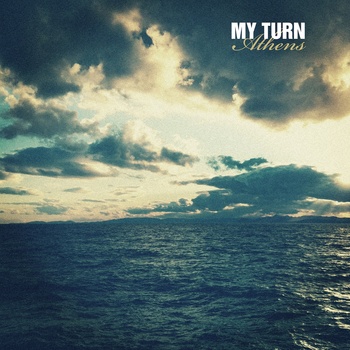 So Greece has a lot of bad stuff going on and that’s reason enough for a bit of hardcore one would say. Currently they are out of the city Athens, to which they dedicated the album title, touring in Spain. My Turn is in interesting band with a very good sounding record and a distinct sound. Time to have a listen to these guys.

The band has been around since 2010 and are apparently one of the main players in the Greek hardcore scene. They’re a vegan/straight-edge band that is known to be hard-working and honest with a sound that is inspired by the early nineties bands. Melodic, think of Youth Of Today, 7 Seconds, Dag Nasty and Good Clean Fun. So that’s what you get, positive and energetic hardcore in an oldschool vibe.

‘Photos On The Wall’ kicks of the album on high speed with a happy buzz to its sound. Both the opener and ‘Broken’ are lyricwise a bit too much repitition of the same lines to my liking. The second also having some recognizable phrases in it (do I taste a Sick Of It All reference?). The vocals are a bit hard to distinguish at times, thought his is in no way to be blamed on the mixing, which is superb. ‘Let’s Laugh To Death’ is kinda representative for the view of this band, that in a world full of crap you’d better laugh at things. Not a bad view I’d say.

There’s a certain childish enthousiasm to the sound of these guys, an energy that is hard to suppress. ‘Bitter Smile’ is like an adrenaline shot with intense riffing and gang shouts. ‘Do You Care?’ questions the world with a more More Than Life sounding emotional vibe to it, which quickly changes into power again after a few lines.“A Bitter Smile can help me to breathe. A Bitter smile can save my life.”  In the booklet there’s a quote by philosopher Immanuel Kant on reason. Unfortunately My Turn doesn’t carry that into the lyrics. The quote deals with reason as one of our capabilities, though the lyrics have more of a ‘go with your guts’ idea. However, it’s a great song.

‘Orange Juice’ is a bit random punkrock lyrics with a high pace, but so is most of this album. Words about being part of something bigger on ‘Orange Juice’, speaking about living life your way (Try to read the lines and NOT think of H2O) and ‘Precious’ about strength from the hardcore unity. It all feels really good and sounds like the songs you want to hear live, the stuff you love. That’s a good thing, however cliché it may be though. ‘We Kissed Goodnight’ might be the most obvious reference to a band on the record, I’ll leave that for you to guess.