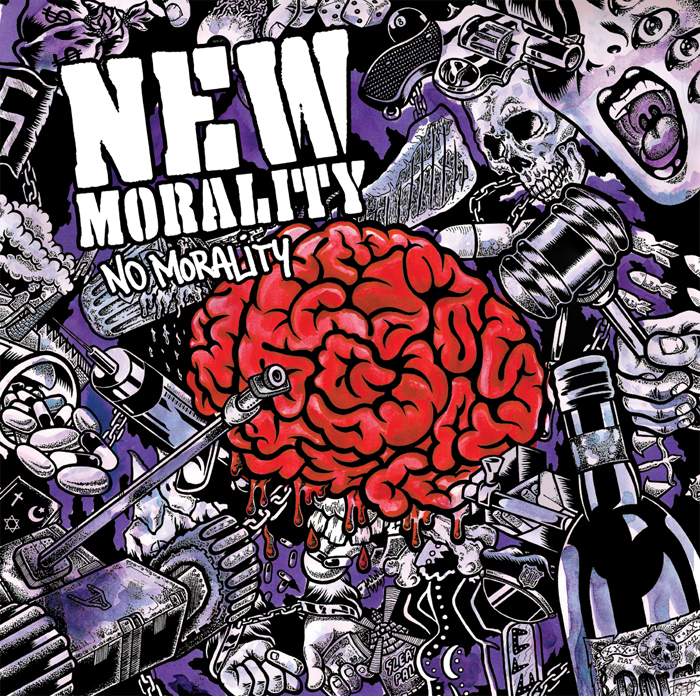 Over the years I’ve been putting on shows, I’ve had the pleasure (in most cases) of booking shows for quite a few bands from all over mainland Europe, of varying styles of hardcore and merit. These bands have helped to shape my view of the European hardcore scene, and I’m not sure if it’s the geographical proximity for touring or some other reason, but most of the bands I’ve picked up on and enjoyed have been from the Benelux countries. Amongst these bands are Arnhem, Netherlands heavyweights New Morality. I first heard their Fear Of Nothing CD a few years ago via their association with Deal With It, and was able to book a show for both bands when the split seven inch came out. The singer, Jonne, made the effort to introduce each member of the band to the audience while they played their intro, which I thought was fun, as it didn’t seem at all contrived (which it might if a UK band had done it, I think), and they powered through a set of NYHC inspired hardcore not dissimilar to Killing Time or Breakdown, which I enjoyed.

Fast forward a few years and worldwide DIY touring and New Morality return with their second full length album, No Morality, via Demons Run Amok and Carry The Weight. The intro and title track seem to signify business as usual as the album opens, both being short, heavy breakdown laden songs to mosh your way around the room to. The guitars have a metallic edge to them that drives the mosh parts, but still retains a rawness that I like, and the bass tones leading the breakdowns have a nice deep quality to them. Jonne’s voice is unpolished and throat wrenching, sounding anguished over the crunching guitars over the first few tracks. Towards the middle of the album the band start to mix in some melody to the blend with tracks like ‘Stranger To Myself’, that feature some more melodic riffs, still in the NYHC vein, that remind me of bands like Crown Of Thornz, which varies the pace nicely while still retaining the heavy sound established earlier. ‘Sad Eyes’ features a wicked solo I felt obligated to mention too, and ‘Dead End Path’ will definitely have me banging my head if the band make it back over to the UK soon. The band round on the second half of the album with a return to the crushing breakdowns, only at a general lower tempo for added heaviness. There’s a couple of moments of lyrical awkwardness (which is fair for a band from the mainland), but if I’m being honest I had to really listen to pick faults with this album.

Overall, No Morality is an enjoyable piece of heavy hardcore that manages to remain interesting throughout it’s length thanks to the band not being afraid to move beyond the general, perceived constraints of their sub-genre, and I’d definitely recommend you check it out if you’re into bands of this sort. Their tireless DIY work ethic has started to carve New Morality a place at the front of European hardcore, and this album cements that position, pick it up the next time they steam roller through your town.