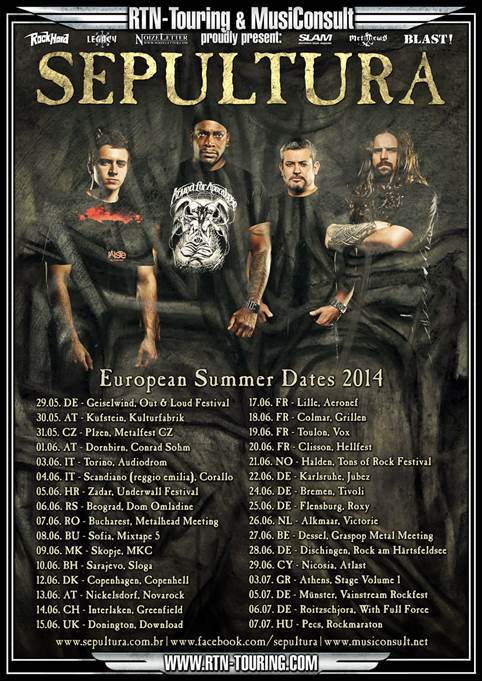 26th of june Sepultura rocked the Victorie in Alkmaar. A bit late you can read about it…. Truely sorry ‘bout that.

And thanks for asking… I sure did have nice holiday!

If you told the younger metalhead that I once was that I would see Sepultura play in my hometown Alkmaar I would ran away and tried my best to have you arrested for randomly talking jibberish to younger strangers! Ten years later it actually happened. And how!

First of all many respect for the Victorie, for building on, working on and standing strong for cultural Alkmaar. Alkmaar is momentarily  getting gang-raped by the city council when it comes to culture, but these boys (who also were involved with the late and great Parkhof, my punk rock Mecca) manage to keep attracting good or big names to this beautiful town.

Nowadays I am in no way a metalhead but I do still love Sepultura. Thanks to their swing and groove within the crushing metal riffs and breaks. As a non metalhead at a show like this the support act is a long long long long sit through. Suicide Angels, to my ears, are from every angle a mega cliché. But please do correct me if I am wrong. Maybe it is a brilliant refreshing metal band what my simple punk rock ears can’t hear.

After this long long long long long sit through some monastery bells start clinging and the Brasilian metal legends climb the stage. Guitarist, and longtime member, Andreas Kisser dressed in the famous Sepultura football jersey (note to self: buy one at the end of the gig!).  Immediately they start bashing! No groove, no swing, just strain metal. But from the first tunes they immediately have a constant grip on the audience.

This grip can be called a stranglehold cause it only keeps tightening up during songs like “Propaganda” and “Attitude”. Derrick Green makes an impressive appearance to me. He seems excited, focused but also has a lotta fun. Also notable is that he must have an hardcore past, the way he handles the mic is in a classic hardcore style! He keeps thanking and stating that Alkmaar is one of the most beautiful towns he’s ever been. And I actually do believe he’s integer about this…

The band rips it on and on. As a non metalhead it gets a bit boring somehow. They play perfect but I’m longing for the classics. And when the, to me, first classic hits…. It’s a magnificent one. “Biotech is Godzilla” is crushing! They play it in a near crusty vibe. It’s raw, it’s old school and it’s fast as fuck!

Apart from ‘Biotech’ they maintain their tight set until they cover a Brasilian traditional from the late Chico Science. I did not enjoy this song in its studio version and live it’s no better… But props for paying a tribute to the man.

At the end finally the classic classics hit the set! Songs like ‘Ratamahatta’ and offcourse ‘Roots Bloody Roots’ shrug the audience and for the first time the band hit everybody who wasn’t grooving yet. On tracks like this is the first, and probably logical, moments where I miss out on Cavalera. Max’ voice is rawer and fits the songs. But at the end I can only say that Sepultura is still a magnificent live band and also the classics are great. If you ever get the chance, go check them out. The vibe, the atmosphere and the technical appearance is superb!

And I sincerely hope that Victorie continue the path they’re following….. but please ditch the coins. That is pure rubbish and doesn’t fit the venue…