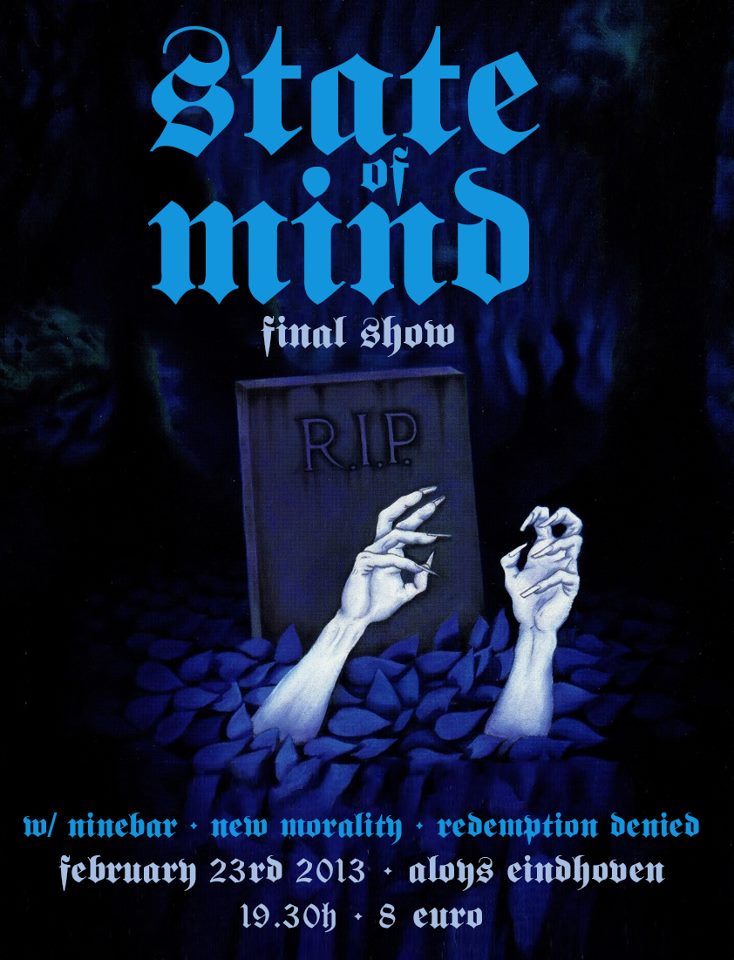 Time to say farewell to another great European hardcore band. A final mosh for State Of Mind or, more in terms with the band itself, a final groove.

State Of Mind chose the small Aloys cafe as their final destination and it was a solid choice. The venue was pretty crowded and the overall vibe was very positive. A huge contrast with the street the Aloys is on: Stratumseind being one of the most notorious bar streets in the Netherlands.

Fortunately the people who visit the other bars aren’t into the kind of loud music played by a band like Redemption Denied who opened up the show with a tight set of hardcore that reminds me a lot of Death Threat and a bit of pre-Reflections Records No Turning Back. It’s great to see a fairly young band go on stage and play a good set. It’s even better when the vocalist isn’t afraid to speak his mind and has more to say then ‘We’ve got merch in the back’  or ‘Have fun with the next band’. Redemption Denied once again proved they’re on of the newer bands to watch out for.

New Morality‘s vocalist Jonne was ill and couldn’t make it to the show. Instead of canceling the whole thing, the band found a replacement and played a short set which included No Warning’s ‘Short Fuse’. The crowd went wild on that one.

All the way from the UK were Ninebar. And though it might be close minded of me, when I noticed two vocalists getting on stage I knew this band wasn’t going to do it for me. I respect them for getting in a van and driving all the way just to play a farewell show. But no, I’m not into it and never will be.

As said, the final groove for State Of Mind. After eight years one of the few original Dutch bands is no more. And they couldn’t have done a better last salute. Upfront people were singing along, Emile outdid his performance and the rest of the band made the heads boppin to songs from all over their discography. It was great to hear Emile really speaking his mind on the end of the band but even more on the things that frustrate him (and me) going on in the outside world. Closing with The Clash’s ‘White Riot’  was an excellent choice.