This Routine Is Hell – Repent. Repeat 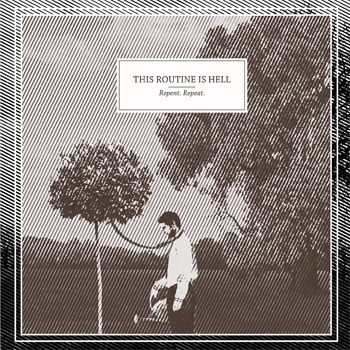 Now that Ceremony has strayed from the fast dissonant hardcore path and with Paint It Black sporadically doing shows time is more than ripe for the world to finally take notion of what some Europeans already knew back in 2010 when This Routine Is Hell released The Verve Crusade: there is another band out there doing the same kind of music and actually as good as their American colleagues. Now, after some delays there finally is a new This Routine Is Hell release and it was partly worth the wait.

‘This is not about the foundation.
No diatribe against globalization.
This is a matter of ethics and human nature.

A new dawn of a competitive age: the birth of men.
For every race is a match and there’s no dead end.
We’re fighting battles within our heads.
This is a call to keep in touch with our instincts.
Not to fall for their tricks and their conflicts.
Always hungry? Well ask yourself: What’s happiness?’

Vocalist Noam seems to have gone even deeper in search of his and humankind’s flaws as he bellows out the above lyrics and more to tunes that have much in common with Paint It Black’s The New Lexicon, only a bit less melodic.

Where The Verve Crusade already was a very tight record, on this new 10″ the band is even less subtle in their delivery making even more of a shattering impact. All in all I would say that Repent. Repeat is better yet I expected a bit more. The songs are all pretty straight forward whereas I expected the band to maybe add some more experimental stuff. Then again maybe they want to fly straight on this 10″ and keep the songs that don’t fit as nicely for a later release. In the end that probably bothers me most about this 10″, two years after The Verve Crusade six songs, however great, are hardly enough to fill my appetite for This Routine Is Hell. I’m greedy and want more, more, more!!!