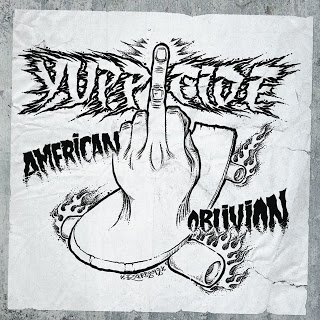 There are bands that are overrated and bands that are very much underrated. Yuppicide is one of those bands that made a few records that are pure classics. Personally I like ‘Shinebox’ that much that for me it fits in the category of Poison Idea’s ‘Feel the darkness’. That record is a landmark record that you can give to anyone to make them ‘get’ hardcore.

What makes Yuppicide so great you ask? It’s this weird combination of art, hardcore, madness, working class punk and poetry. Let me explain this further. Jesse his voice is pretty weird when you hear the band for the first time. He has this weird English accent (which easily is explained since he was born in England) and manner of singing that is unique for the genre. Sometimes it sounds like he is reading poetry and somehow his screams and growls give and idea about the anger, desperation and anguish that can plague a man’s mind. Steve Karps’ riffs and Joe Keefe his basslines seem simple at first but further exploration shows that they manage to write stuff that is catchy and calculated without losing spontaneity. I know this all sounds farfetched and so on but they wrote some of the most memorable songs you have ever heard on a NYHC album. Beside their excellent albums the live shows are always great. The first time I saw them live it was like Dhalsim from Street Fighter left the game to sing in a hardcoreband filled with weird looking guys. Hey, I was eighteen at the time and still smoked pot.

I was more than happy to discover that the band reformed since I listen to ‘Shinebox’ on a religious basis. No week passes by without a Yuppicide song. Although the show didn’t leave the same impression it did way back in those pot ridden days it sure as hell was great to see the band perform again. Of course I picked up their 88 – 98 Anthology because there were the last few demo’s before their split. Okay, I wasn’t impressed and although I was happy to hear new stuff the more ‘metal’ direction sounded weird to me. So the prospect of new stuff from, and I will say this again and again until you discover how much you overlooked this band, one of the best NYHC bands ever filled me with fear for the first time.

When the six song EP on Dead City came out I couldn’t get my hands on the EP as fast as I wanted to. But now I have an actual copy in my hands and first of all, the artwork is fantastically obnoxious again. It’s this provocative and eerie atmosphere that made the band special to me back then and I truly miss this vibe with a lot of bands. Aside from that there are the lyrics again. If I have to tickle you intellectually I would describe them as an urban Lovecraft born in modern day New York. Again there is this guy that is a little piece of dust in a universe with unimaginable horrors. Whether it are celebrities, politics or just rude and stupid people…. it never really ends well and certain doom is always waiting as the character descends into madness, anger or anguish. Don’t get me wrong, this is what I get out of it. I might be a complete idiot but I mean well.

Musically it is closer to the ‘Shinebox’ era than the ‘Dead Man Walking’ era. There is more aggression, the songs are instant sing a longs and are catchy as hell. ‘Dead Inside’, ‘Too Late’ and ‘Flies on…’ are the faster brothers of the more punkier ‘There’s a line’, ‘American Oblivion’ and ‘Not with you’. Most of the time you will feel that this record could have come out in 1998 but small details will prove that Yuppicide has actually evolved a bit. So the only complaint I have is that there are only six songs to discover. But hey, since most of you, except a lot of German fans, don’t know the band as you should, you could always buy the excellent anthology album or the re-issues. The band deserves it and it is never too late…